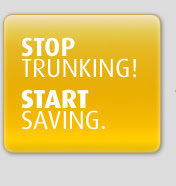 Neterion's Xframe V-NIC is First 10 GbE Adapter to Be Supported in New Release of VMware 3.5, enabling IT Managers to Virtualize I/O-Intensive Applications for the First Time.


Now if we can get the network storage vendors on the ball with 10Gbit support!
Posted by Unknown at 11:44 PM No comments:

Why VMware over Netapp NFS

Some background… The previous information is based on our experience, and not just some theory.

In August 2006 when NFS was announced we were in the planning stage for a major upgrade to our VMware infrastructure. Our VMware infrastructure then consisted of about 20 ESX hosts with about 750 VMs all using Fiber Channel to Hitachi SAN. We are also a heavy user of Netapp filers and knowing the benefits of NFS over SAN we decided to investigate the possibility of using Netapp over NFS. I’m pretty sure we were the first Netapp customer to do this…

Of course the first hurdle was performance. Fortunately, we had more than a years worth of VMware performance data on our SAN. After looking very close at the numbers, we discovered that the throughput to the SAN was extremely low. Somewhere in the 10-15MB/s on average across all 20 ESX host, and the spikes were well under 50MB/s. Since the migration to NFS is so simple, we decide to move several test servers to NFS. All we had to do is mount a NFS share on the current ESX hosts and start moving the VMs. After migrating several 100 VMs to NFS over 6 months, we decided to implement our new Infrastructure completely on NFS.

We purchased 2 dedicated Netapp 3070s and several new 8way ESX hosts for the new project. We also used an existing Netapp R200 to keep 21 says of snapshots for online backups. The R200 also serves as a failover I case of complete corruption of our primary system. Within 6 months we had completely migrated all of our VM’s off SAN and onto Netapp NFS. We now run almost 1000 VMs in this environment.

With our current Netapp IO load on the 3070’s, we estimate that we could add 2000 or more VMs to this configuration by simply adding ESX hosts. The Netapp 3070c IO is running 4MB on average with a few 30MB spikes during the day. Not one IO performance issue has arisen. Our VMware administrators says it’s even faster than our SAN when performing OS Builds, VMotion and Cloning.

We currently don’t run Exchange or Sqlserver VMs, however with 10Gbit and Infiniband solutions on the way I believe that soon all real servers will be virtual.

So I stand my initial statement, however I should say that today it’s really Netapp and not NFS that makes the difference. In the future however, I expect to see other vendors catch up with Netapp and all their added value to the VMware Infrastructure environment.


Additional Links to NFS for Vmware

In May 2007, NetApp announced a new deduplication technology that can significantly increase the amount of data stored in a set amount of disk space: Advanced Single Instance Storage (A-SIS) deduplication. This technology is available (at no charge!) for NetApp.

How much space can you save? It depends on the data set and the amount of duplication it contains. Here are a couple of examples of the savings that NetApp customers have seen:

Here's a great TechTalk A-SIS and a Technical Report Here

A-SIS is part of the Nearstore license which I believe is under $3K, but don't quote me... Your rep should be able to give you a quote. You need 1 license per filer and no other cost.
You vmware volumes will be reduced (calculate) by 50-80+% which will more than pay for the license...

Posted by Unknown at 8:05 PM No comments: 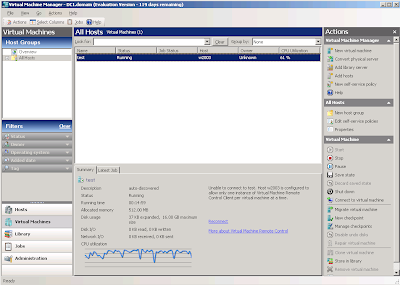 Here are some first impressions:

http://4sysops.com/archives/microsoft-virtual-machine-managers-vmm-bugs/
Here is a video overview of VMM: 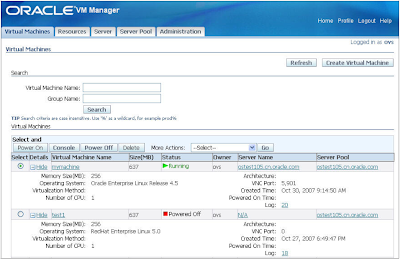 Oracle is entering the virtual arena with its own Oracle VM hypervisor based on Xen called Oracle VM. The new product includes a web management console and will be released for free (with optional support agreements) on November 14.

Oracle VM will available as a free download here Wednesday.

What is Oracle thinking? I don't get it. Maybe it will be clear on Wednesday.

Posted by Unknown at 8:32 PM No comments: