This morning, Netapp took a u-turn in their product offering by announcing two 100% SSD storage appliances for both SAN and NAS.

After spending years on integrating several levels of cache into their current operating system, Netapp appears to have had a change in direction and decided to go all in with SSD...

The EF540 SAN solution builds on it's SANtricity® operating system that was purchased from Engenio/LSI in 2011.  "The EF540 is said to achieve 300,000 IOPS and the transactional performance of 1000 15K drives"

The more interesting announcement almost appeared as "by the way" statement in today's Flash product announcement.    You have to play the the announcement several times to actually hear the word "FlashRay".

The FlashRay™ product architecture is being designed from the ground up and will combine consistent, low-latency performance, high availability, and integrated data protection with enterprise storage efficiency features such as inline deduplication and compression. 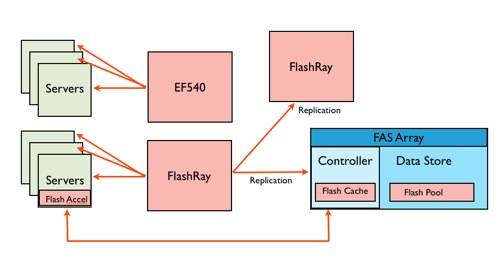 Beta systems available this year, and available in early 2014